Dino from the Flintstones never looked so... well... happy?

It’s true. For the last month, I’ve forgotten that I have a blog. Actually, it wasn’t so much that I forgot… it was more that I have been a little busy with ‘Occupy Hobby Lobby’, ‘Occupy Kids’ school’, and ‘Occupy Weight Watchers’.

Short story… I am NEVER at home anymore. Between subbing at the kids’ schools, working on craft projects for the holidays, subbing, training for Weight Watchers, hitting my Director goals for Thirty-One, and SUBBING (can you tell I’ve been subbing a lot?!), I have not been keeping up with certain things.

And the blog? Well, it’s been pretty low on the priority list.

But I just had to share something that made me laugh out loud today, as I subbed in 2nd grade. One bonus of subbing for the younger grades is all the ‘gifts’ that those little darlings want to bestow on you. A substitute is such a novelty for little kids… “Someone new to tell my story about the cat that my dad accidentally ran over on the way to school! Someone new that I can ‘help’ with all the rules, and who doesn’t know that we’re really not supposed to color with the Sharpie markers !”.

As opposed to being a substitute for older grades, or God forbid, middle school… “Someone new that doesn’t know I’m NOT actually a foreign exchange student who claims to speak no English!” (oh, the things they try to get away with! ;)

Anyway, by now, I’ve subbed at the kids’ school often enough that most of the kids know me pretty well, and I walk out the door at the end of the day with a sampling of drawings and little notes. Today’s example, though, deserves its own special badge of honor. It was definitely one of those that makes you say…

Which just happens to be the code for either:

In this case, it was code for the 2nd one. 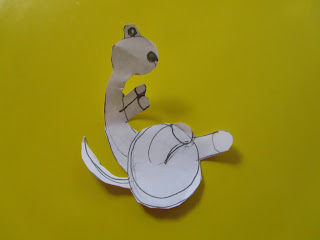