2. Clearly all that smoking is paying off.


4. And with my re-discovered ‘pre-pregnancy self’, I thought I’d finally garnered the courage to share some of my pregnancy photos with you.


5. Don’t forget, though, that I gained a LOT of weight with each of my children. 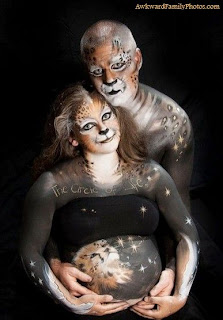 
Are your eyes bleeding??!? Because mine are.

Found this on Awkward Family Photos (truly, truly awkward)… 'The Circle of Life'...and I was stunned. And disturbed.

And you know me, I can’t go this alone once I’m stunned and disturbed.

Can someone please do the world a favor?

And shut Donald Trump up. This guy is ridiculous. Successful in real estate? Yes. Master of the bad hair-do? Absolutely.

I know he’s smart. I know he’s insanely wealthy, and could buy and sell little old me about a 100 billion times over. But that doesn’t mean he has any integrity.

Now he’s claiming ‘responsibility’ for the government releasing the President’s birth certificate. He’s done what “no one else has been able to do”. What a douche.

And don’t even get me started on the so-called ‘Birthers’. I personally think if you are enough of a slack-jawed idiot to believe that the President was not born in the United States, and that there is some huge conspiracy to conceal that he was born elsewhere… well, I think you should potentially have your right to vote revoked, anyway.

Hey, here’s a newsflash… Hawaii is not the only state that issues the ‘Certificate of Live Birth’ (short version) as valid documentation in place of the longer birth certificate (which is kept as a vital record at the state level).

Texas does, indeed, issue a ‘Birth Certificate’ (long form), but Colorado? I checked my two oldest kids’ certificates which were issued by the state of Colorado, and they were actually the short form listed as a ‘Certification of Vital Record’.

Nowhere on these documents are the words “Birth Certificate”.

What a pity. Guess that means that they weren’t actually born in the United States of America.

And that if they ever attempt to run for President, they will have to pander to the lowest common denominator.
Posted by Staci at 1:23 PM 2 comments:

I will already be knocking... my head against the steering wheel, that is.

My three children have discovered a nifty (and by 'nifty', I mean to say, 'annoying as hell') trick to do while we're waiting at a stoplight.

If they rock side to side in their seats, AT THE SAME TIME, and IN THE SAME DIRECTION...

they can get the van to rock back and forth at a pretty good clip.


Which is totally what people expect to see from a mini-van with Disneyworld license plates, am I right?
Posted by Staci at 8:23 PM 1 comment:

Hope you all have a wonderful weekend, and a blessed Easter Sunday. 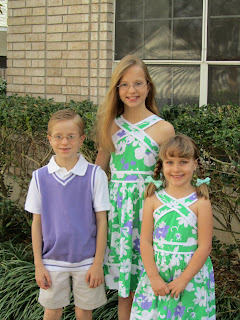 Sending love to your family from our little 'Peeps' :)
Posted by Staci at 3:42 PM No comments:

True confession time… I LOVE the movie, Jurassic Park. Love it. Just the original, though. Not the subsequent ones. (a little too much Jeff Goldblum in those… 'that's the essence of chaos theory'.)


I know it practically word for word, primarily because Phil and I used to watch it at least three times a week. It was one of the few movies that we never tired of. And since I know you’re just dying to know what the other ones were: Twister, Blazing Saddles, and Better Off Dead. And now aren't you just so impressed with our sophisticated movie palates?

In our defense, our movie-watching runs the gamut… or at least it DID, back when we didn’t have to pay $12 per movie ticket, $25 for popcorn and soda, and $50 for a babysitter, just to see ONE of the Oscar nominees. But Jurassic Park and the others are like the ‘bubble gum pop’ of movies. Catchy and kitschy, and perfect for background noise while folding clothes, or doing some other dreary chore.


And now? All three of our children are bona fide Jurassic Junkies, too. I wasn’t sure if they were too young to see it, but it became a moot point one Saturday afternoon when they saw part of it on basic cable while I was out running some errands. Clearly only one half of the parenting team had concerns about the potential of the children being traumatized by giant, man-eating dinosaurs.


And when I mentioned that we used to watch that movie all the time, the kids BEGGED us to be allowed to see the entire thing, too.

And true confession time… since I felt like the Compsognathus was already out of the bag (small dinosaur… cat-size), it was ME that went searching through old boxes in the closet to find the VHS tape, so that they could watch it for Pizza and Movie Night.

They are definitely our offspring because not only do they love it, watch it every chance they get, and rewind their favorite parts over and over, but they also quote it to each other incessantly as part of our ‘movie quote-along’ that we frequently play at dinnertime.

Just a few of our faves…

Mine: “Yeah, but John, if Pirates of the Caribbean breaks down, the pirates don’t eat the tourists!”

Phil’s: “Dodgson! Dodgson! We have Dodgson here! Nobody cares.”

The kids love to wait until we’re on a day trip in the car for this one:
‘Well… we’re back… in the car again.”

And of course, everyone's favorite: ‘WHERE’S THE GOAT?!?! ’
(This one happens to be especially funny when standing in the meat department at H.E.B.)


However today, I did have a brief pause... Is this movie too violent? Too graphic?

You be the judge… when I walked into my boy's room today, l discovered this on his desk, with a little hand-lettered sign that said, “Welcome to Jurassic Park!” 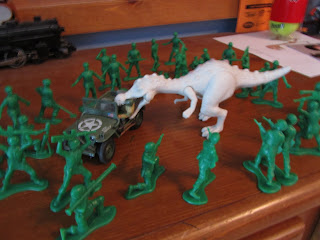 Wow. The soldiers armed and at the ready? The dinosaur?


Who happens to be making a quick snack out of the driver of the Jeep?!! 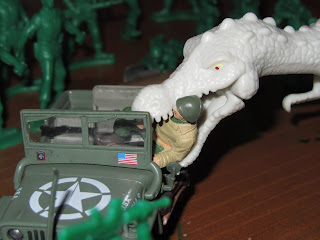 I think it's totally freaking awesome.
Posted by Staci at 8:00 AM 1 comment:

Multi-tasking is critical to… wait, is that the phone?

I heard the results of an interesting study yesterday… it basically said that the older you get, the harder it is to multi-task. I have to say I am finding that to be more and more true.

I remember back in the day, (back before I was one clock stroke away from turning FORTY ;) I could cook a healthy dinner of macaroni and cheese, sliced hot dogs, and canned green beans, all while shoving the pile of dirty clothes over on the other side of the couch so that I could nurse the baby, read yet another train book to a two year old, and rewind ‘Baby Galileo’ for my 4 year old.

It was a necessity to be able to multi-task back then, but now? With all the kids in school, and all the extra time (hah!) I have on my hands, I can easily find myself wandering from one task to the next. Some days I feel like I’m living in the book, “If You Give a Mouse a Cookie”.


If you give a mom a cookie, she will remember that she needs to bake 4 dozen more for the bake sale.


When she goes to bake the cookies, she will realize that she needs to find a new recipe that does not include baking soda because the last time she went to Target to buy it, she got distracted by the shiny ‘Clearance ‘signs.


When she tries to look up a recipe on-line, she will remember that she needs to send an email to the class about the teacher’s birthday gift, since in a fit of giddiness about the kids starting back to school last August, she signed up to be room mother.


When she’s checking her email, the buzzer on the dryer will go off. When she takes the clean clothes out of the dryer, she will realize that most of the dish towels have holes in them (sadly, it’s true.)

So she will head to the kitchen to jot down ‘Buy NEW dish towels’ on the to-do list on the refrigerator.


When she is at the refrigerator, gazing at the multitude of school notes, lists, permission slips, and spelling lists stuck underneath brightly colored magnets, she will realize…

Things I do that make my husband crazy...

In my mind, a dishwasher is supposed to actually WASH dishes. Phil insists that every dish must be hand-washed prior to being washed in the dishwasher. WHAAAT???

So he is and has been on all dish duty in our home for the last, oh about, 14 years. It works for us.

2. When I don’t put gas in the car when the warning light comes on, and instead I drive home and park in the garage. In my defense, I always plan to get gas FIRST THING when I leave again. Is it my fault that without fail, he is always the next one to drive that vehicle??

What can I say? It's a system that works for us. Okay, admittedly it works a little better for me.

3. When I go on an evening walk with a friend, and shortly after, bust @$$ back inside, yelling at him to grab the keys because I’ve found an armoire that one of our neighbors has put out with a ‘FREE~ TAKE ME!’ sign on it.

I know, right?!? I decided on the spot that I needed it for the playroom. And it was free.

Plus? I couldn’t lift the stupid thing all by myself without worrying about busting a gut (literally… I had hernia surgery less than 6 months ago.)

4. Some of my television choices. Namely… my obsession with the show, ‘Sister Wives’ on TLC.

I can’t help it. I am completely and utterly fascinated with this show (otherwise known as ‘The Real Housewives of Utah ;) And yes, I am aware that most Mormons are not actually polygamists, and that this family is the exception to the rule.

I have told Phil we should consider getting ourselves one of those ‘sister wives’. Maybe one that knows how to properly load the dishwasher and put gas in the mini-van.

Things that make me happy:

1. Hearing "One Shining Moment" sung by Mr. Luther Vandross. Evidently Jennifer Hudson was a little busy being Weight Watchers' newest spokesperson. Which was just FINE with this basketball non-superfan. I think we've established by now that I only tune in to the championship game for the post-game highlight reel. And that song... which in my heart, is second only to the Star Spangled Banner.

2. A weekend with absolutely NOTHING going on... a weekend of sleeping late, eating out, going on bike rides, and taking naps (notice how two of my personal highlights have to do with SLEEPING??) Of course, maybe I just *think* that makes me happy, because honestly? I can't remember weekends like that anymore, and I can't even tell you the last time we had a weekend where we had nothing on the agenda.

3. Speaking of busy weekends, and things that make me happy? Watching my girls at their baton competitions. Well, maybe I'm not being entirely truthful... it makes me happy watching my girls get awards at their twirling competitions. Actually WATCHING them while they compete is enough to give me an ulcer, and fingernails bitten to the quick. It STRESSES me out! (Phil calls me a 'stage mom', but don't you dare call me that or I will hit you with my 'Twirler Mom' clipboard, and spray you straight in the eye with my blinged-out can of Aqua-Net.)

5. Blogging... I really should get back to doing this more than once a week!
Posted by Staci at 8:47 AM 1 comment: