Checking the mail around here, as you may remember from previous posts, is a pretty infrequent occurrence. In fact, when I checked it yesterday, Josie actually said, “Why are we checking the mail? Didn’t we just check it two days ago??” She seemed a little concerned. Like I was waiting for something suspect to show up in our itsy-bitsy mailbox. Because she knows all the good stuff gets delivered directly to the door, via UPS or Fedex, and what can possibly be worth heading to the mailbox TWICE in one week?? I’m raising snail mail snobs.

All that is to preface this…without fail, in the last three months, I have received weekly coupons in the mail. Not necessarily unusual.

Except that they are coupons for Similac baby formula.

I find this incredibly odd. Especially since my ‘baby’ is 6 and a half years old. And she’s never had an ounce of formula in her life.

My first two kidlets had formula after they were weaned from my own Special Blend (which was a heady concoction of Diet Coke and Snickers bars, otherwise known as the ‘sleep deprivation diet’) at around 8 and 6 months, respectively. We made the switch to mostly solid foods then, and then switched exclusively to milk in a Sippy cup upon their first birthdays. But the youngest? She was a champion nurser, and weaned right at a year.

What makes the coupons even more curious? They are addressed to me, with my name spelled correctly (unusual in itself) and each one highlights the age of my ‘baby’. Today’s coupon mentioned all the things my baby can do now that he/she is 3 months old!

Oh, it also mentioned that I was probably thinking about heading back to work after my maternity leave… which has lasted approximately 11 years.

I have to say, though… this ‘mystery baby’ has been the cheapest and easiest baby so far. I credit the coupons.

What I don’t understand is why companies don't send out coupons for what new moms (and seasoned moms, for that matter) really need?

-A Bottle of red wine

-a new tube of lipstick (sometimes that’s the only makeup we have time for!)

This week in books, television, and movies

We are still making our weekly trips to the public library, and the kids are racking up their reading points.

I just finished the most amazing book called, ‘Partitions’ by Amit Majmudar. It is his debut novel, and it is about the 1947 partition of India and Pakistan. It is absolutely stunning. The prose has such a lyrical, authentic quality. It is less about the historical aspect, and more about the humanity.

Anyway, I cannot recommend it enough.

... something I’ve absolutely had enough of: “The Trial and its Aftermath”. Yeah, you know to what I’m referring. I admit, I did watch parts of the trial (Phil would use the word ‘obsessively’, but then again, he watches weird things on SYFY, so there’s no accounting for his television viewing), but now that it is over… IT’S OVER, PEOPLE!!

Were we all unhappy with the outcome? I’d say, at least, oh, about 93% of the U.S. population felt that it was an absolutely shocking acquittal, but does that mean that more than a week since it ended, CNN Headline News still needs to be hijacked by constant coverage of the trial, post-trial, interviews with jurors, and Nancy Grace’s shrill diatribes?

Can I just get the news now, please?!? I really don’t care to turn on the news and hear a family therapist break down the toxic relationship between Cindy and Casey Anthony, or listen to a team of hair & make-up stylists describing how they would alter Casey Anthony’s appearance to help her maintain her anonymity once she’s out of prison.

I've heard there are other things going on in the world, that are not restricted to a courthouse in Orlando??


In addition to books, and audiobooks, we’ve been checking a lot of DVD’s out of the library. Some have been hits and some have been disastrous misses.

Hit: Disney’s ‘Swiss Family Robinson’… we watched it last week for pizza and movie night, and the kids were completely enamored. I had never seen it, but I’ve been to the tree-house and Disneyworld and now I ‘get’ it. They loved watching it the first time, and the 2nd and 3rd. I do have to say, though, that it is a LOOOONG movie. Kids in the olden days must have had longer attention spans because this movie was well over 2 hours.

I was beginning to think those pirates would never abandon that island!

All 3 reported that they never wanted to see it again, and that it needed to be taken back to the library ASAP. They all agreed to never speak of it again.

Why? Oh, I don’t know… it might have a little something to do with the fact that it is a movie about a little girl who visits the ‘Other World’, but tries to escape because she doesn’t want buttons sewn onto her eyes, like all of the other ghost children. Her parents are kidnapped, and she has to sever the hand of the ‘Other Mother’ to save her parents and the eyes of the ghost children.

They don’t ever complain that they are ‘bored’ anymore... especially since I bought my own copy of the movie, and offer to let them watch it if they can’t find anything else to do. ;)
Posted by Staci at 5:17 PM No comments:

"Good God, man! You almost got The Cheese Touch!"

Yummy, right? Just what every kid wants for their birthday... a slice of moldy cheese. 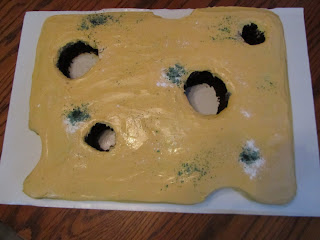 Well, for a certain 'Diary of Wimpy Kid' super-fan, it was a little slice of 'AWESOME-NESS'.

Technically, it was a 'Diary of Wimpy Kid' party by default. I was left scrounging for party invitation ideas when my husband deemed the 'oh-so freakin adorable' robot invitations I had made as, "um... a little baby-ish for a 9 year old, doncha' think?"

Dammit. It was true, I guess. Somehow, when I wasn't looking, my kids started doing the most obnoxious thing... growing up.

Anyway, the invitations were Wimpy Kid (and they, too, were 'oh-so freakin awesome', and adorable in their own right. *sigh), and the cake was just the perfect thing to fit this new party theme. (And we all KNOW how much I love my party themes, am I right?!?)

I took it to Austin's Park and Pizza for his party, and I finally ended up covering the cellophane window on the cake box with napkins.

People would walk past the table, peer over, and do a serious double-take. I can only imagine what they were thinking... "What in the hell did that kid do to deserve THAT??" 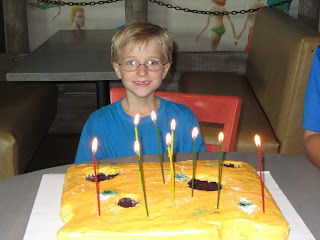 But it was a hit with the birthday boy, and his friends, and they all ate HUGE chunks of the cake, even though they initially expressed concern about whether they should it with their fingers crossed (that keeps you from getting The Cheese Touch, you see?)


I think the boys' favorite part of the cake experience, though?

All those jokes after the candles were blown out, and wishes were made...