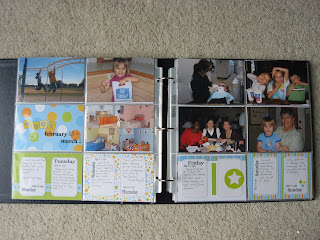 Monday: Davis and his pal, Ben, on the monkey bars at school. I was there taking pictures for the yearbook, and I got some cute shots of the first graders on the playground.

Tuesday: Libby's checkup and cleaning at the dentist... NO cavities, and Dr. Kupec even said that he didn't think the nighttime thumb-sucking was a problem. What?! Okay, doc, whatever you say...

Wednesday: Check out those beds. They're all made. Just had to take a picture for posterity's sake! I could look at that picture all damn day. Seriously.

Thursday: Davis's checkup and cleaning at the dentist (it was a slow 'news week', alright?) He chatted up the hygienist all about his love of giraffes. A six year old's version of flirting.

Friday: Dinner and drinks with my pals, Shanita and Shanda at Trudy's. Good times... ;)

Sunday: My mom gave a necklace to Libby on Friday (the legendary diamond "L" necklace that my mom once told Libby she would give to her, and Libby asks about EVERY time my mom comes down to spend the day). I purposefully put it as today's picture because Libby has NOT stopped asking to wear it. And she's not hesitant to ask anyone that will listen, "Did you see my 'L' necklace?" 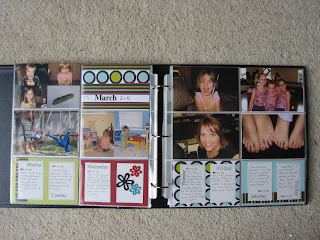 
Monday: After school snack... Ants on a log. The kids love making their own snacks (and a gi-normous mess to go with it!) But if you can zoom in... Libby just has celery and 'ants'. No peanut butter for her, of course.


Tuesday: Libby and her pal, Grant, swinging in the backyard. Grant is a little more daring...


Wednesday: Sometimes when it gets too quiet upstairs, I get a little nervous. On this particular day, the kids were just playing quietly in their own rooms. Really?!! Yep. Had to capture the moment... ;)


Thursday: I had another picture all planned out for today. It was Western day at preschool, so I'd taken a picture of Libby in her boots and hat, and was going to use it as my 'Thursday' pic. That is, until she got a comb tangled in her hair. (I am seriously the WORST mother EVER!)


Friday: Another Friday night, another mania at the scrapbook store. Love being the hostess, don't love being there until midnight. But just thought I'd take a 'self-portrait' at my home away from home ;)


Saturday: Josie's twirling team... they performed at the community center festival, and did a great job! She was super proud of herself :), and I think it will give the girls some confidence for their competition in two weeks. (it definitely made me breathe a little easier, since I hadn't really seen them perform it before, without being led by their coach)


Sunday: Spring fever means flip flop fever around here. And no self respecting lady wears open toed shoes without a pedicure... so I painted the girls' toes. We even topped off their cutie toes with little stickers. Ready for spring! (oh, AND I just checked the weather, and a cold front's headed our way this week.... oh well!)
Posted by Staci at 11:46 AM

Love it!! I am working hard to try and catch up this year so I can start this next year!!