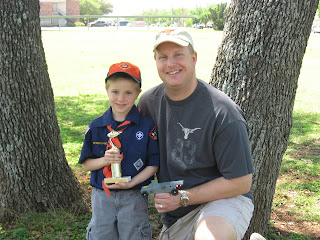 A super quick post... just had to post this picture of my boys. My little Cub Scout and his majorly proud daddy. They worked so hard on that little shark car.

Davis raced his car in the district Pinewood Derby today, and won 2nd place in his rank (Tiger). He advanced to the finals (where he competed against Tigers, Wolves, Bears & Webelos), but he didn't place in the final round.

Since he'd already won his 2nd place trophy, Davis wasn't fazed one bit, and was excited that now he finally gets to play with the car he built (it's been sitting on a shelf since the Pack derby, so it wouldn't get damaged prior to the district race).

He'll probably sleep with that trophy tonight. He might just have to fight Davis for it, though. ;)
Posted by Staci at 2:44 PM

How cute are your boys!! I am sure this is one of the many pictures that you took today!!!

Staci, I know you were happy to be there. I am sure lots of photos were taken and there will be a scrapbook page on this one ;o)