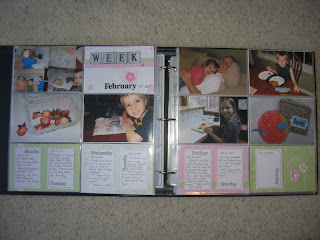 Okay, so I posted the Project 365 from two weeks ago, two days ago...so I'll post last week's today! I've given up on trying to remember what week number it is...

Monday: The kids had no school because it was President's Day... or as Josie was calling it, "Obama Day". ;) It was a yucky, rainy day, so we spent the better part of the afternoon making and decorating sugar cookies. Yes, from scratch! Okay, let me give you a second to be impressed....

Thursday: Libby was cranky all damn day... she was snuggling up with Phil in the afternoon because she was upset (big surprise...usually she's all about being a Mama's girl...) I went to take a picture of her grouchiness, and all I got was a big smile. Little stinker.

Friday: Josie chopping veggies for the guinea pigs... she is such a big help, and LOVES her 'babies'.

Saturday: Davis eating breakfast from his "Special Day Plate" before the big Pinewood Derby, which, by the way, he won FIRST PLACE in his rank with his shark-a-riffic car. And yes, my husband rocks. ;)

Sunday: Some examples of the projects that I spent almost the ENTIRE weekend teaching at the scrapbook store. It was 'Make and Take' weekend, so I must have demo-ed this thank you note, and this mini-album... oh... about ten million times?!! Well, give or take a million.

And I just realized that there is no journaling on Sunday's card... I was soooo eager to get this week posted that I jumped the gun. Oops!
Posted by Staci at 12:11 PM

Very nice!! I love the pages, so simple, but so great!!

Okay, so I thought that a "pinewood derby" was the one where they make the cars, sit in them (of course with a helmet on) and roll down a hill. So, imagine my surprise at the size of Davis' car! LOL I get it now. :)