Your kid's so cute, they should be in a magazine! 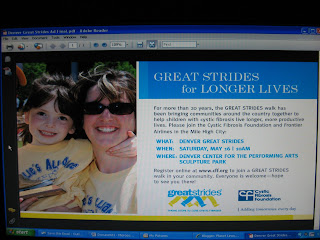 This, my friends, is a magazine ad. Yep. That’s right. It is from the ‘in-flight’ magazine for Frontier Airlines. One of those nifty little magazines that is conveniently tucked into the back of the seat in front of you (no, not ‘SkyMall’… the OTHER one! You know, the one where the idiot that flew before you attempted the crossword but wrote in all the wrong letters? In pen?!)

This is one of my bestest friends in the entire universe, Jen… (you may have seen her various and witty comments on this here blog!), and her daughter, Allie. Allie was born just a few months before Davis, and Jen actually went into LABOR with the little darlin’ at my house! (Sidenote: she didn’t think it was labor… she just thought she had indigestion… from my cooking?! Humph!)

To this day, I believe we cemented our friendship through being pregnant together, getting irritated with our husbands together, traversing the first few years of ‘mommyhood’ together, and weathering a few storms together.

And this magazine ad brings me to one such storm. A few weeks after Allie was born, she was diagnosed with Cystic Fibrosis. If you’re not familiar with CF, it’s a pretty terrible disease. Fortunately, Allie stays healthy with her regimen of daily enzymes, vitamins, and breathing treatments.

She’s also a kind of a spunky child. She definitely has a mind of her own (a kid after my own heart...) Jen and I always joke that Allie and Davis were separated at birth. Together, the two of them could… well, I don’t want to even think about what mischief the two of them could create! I think one day they’ll probably get married, and then God help us all! ;)

So every year, we have ‘Allie’s Walk’… okay, well it’s actually the ‘Great Strides Walk’ to raise money for Cystic Fibrosis research, but around here, we prefer just to call it ‘Allie’s Walk’. I'm including the link for more information about the walk, information about how you can donate some spare change, and more about Cystic Fibrosis.
http://www.cff.org/Great_Strides/dsp_DonationPage.cfm?walkid=5702&idUser=114738
(Seriously… educate yourselves, people!)

Unfortunately for yet another year, the Linsons will be at the walk in spirit only (hey, it’s in Denver, okay?!), but even from Texas, we’ll always be a part of ‘Allie’s Alliance’ (cool team name, huh?) Because we love this kid, and we love her family, and we send a prayer up to heaven every day that a cure is found.

Aww. A very dear friend of mine has CF and is currently married and living a wonderful life with a great job with his beautiful wife. It makes me so happy to see him and how far he has made it in life. He also had leukemia as a teen and survived it while also fighting CF. I hope every other CF survivor can achieve the same things and I will now think of Allie when I see my friend and will hope good things for her as well

Thank You!! ( I am crying right now) You are the bestest friend ever in the world. You know that the Linson's love and support is a huge reason that the Levine's can make it through. We love you all.

Jen
ps I am putting this in the CF walk album :)

That's a great picture for the magazine! I'm glad there's someone who *just might* keep up with Davis.